Marijuana can be grown indoors or outdoors and require low general maintenance to produce usable marijuana. Following are the stages of growth along with a brief description.

This is the very first stages of plant growth.  Seeds are placed in a warm moist environment until the “taproot” root breaks out of the seed shell. The young seedling is then placed root down in the growing medium of choice.  For the next few weeks, the young seedling is grown under 18 to 24 hours per day of fluorescent or similar moderate wattage lighting. 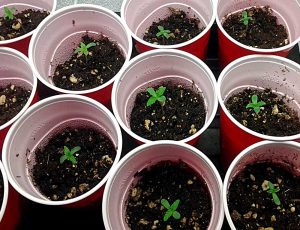 Plants can start being fed once the original leaves that showed after germination have yellowed and/or shriveled. Depending on the growing conditions and variety, this can happen anywhere from 10-17 days or more after the germinated seed is planted or after seedling has risen out of the ground and opened up it’s first set of leaves.

*Tip: Plant seedling in a small pot. When you’re ready to move on to the vegetative growth stage, you can transplant into a bigger pot. This will help regulate even drying out after watering the plant and even root growth. 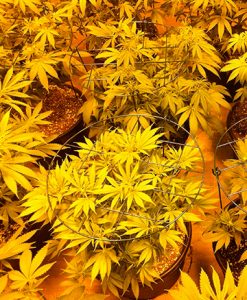 After a few weeks of growth, the plant will be ready to be transplanted into a bigger pot and have it’s light strength increased. At this point, the roots will have grown a base system structure that can transport water and nutrients and can now build new leaves and branches rapidly. Generally speaking, plants will be ready for full vegetative growth when there are about 3-4 sets of leaves and branches from the base of the stem to the top of the plant. Lights should be switched to a Metal Halide (MH) high intensity discharge (HID) lamp and remain on the plant for 18 to 24 hours per day. At this stage of growth, the plant will go through a robust stage of leafy growth, rapidly growing branches and new sets of leaves. There will generally be an increase of feeding to accommodate the robust new growth.

*Tip: For some varieties, employing a technique called “supercropping” can have dramatic effects on growth and yields, especially for known low yielding varieties. 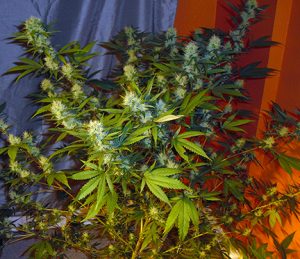 Depending on the variety, most marijuana plants flower and ripen in 8-10 weeks. Generally, Cannabis Sativa takes longer to flower (11-14+ weeks), while Cannabis Indica finishes quicker, around 7-9 weeks. Hybrids, or crosses of Sativas and Indicas can fall anywhere in the range, depending on which mix of parental traits the hybrid offspring displays.

During flowering, the feeding is changed to support flowering and resin growth over leafy growth. Potassium is increased and nitrogen is slowly decreased over the flowering period.  Additional trace elements for certain varieties may also be required if growing in soilless mixes.

Flowering can be broken down into 3 phases, early, middle and late. For a typical variety that flowers in 9-10 weeks, during the 1st 1.5 – 2 weeks of the flowering period (early), the plant will grow vegetatively at a vigorous rate. Called the “stretch” period, the plant will create the most leaves and branches it can in order to reproduce the most amount of seed before senescence (plant death). 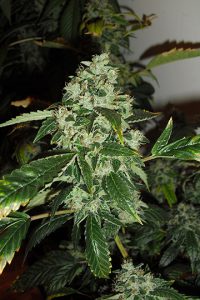 After the “stretch” period, the plant will dramatically stop growing vertically, and small clusters of white hairs will start to grow along the branches of the plant. This “middle” flowering stage will continue until about week 6-7, depending on variety. Towards the end of the “middle” stage of flowering, the small clusters of white hairs will have grown into visible marijuana buds and may have started to display trichomes. Trichomes are small, mushroom like structures that grow on the surface of the marijuana buds that fill with the range of chemical containing resin, or Cannabinoids, that produce medicinal and psychoactive effects. These trichomes are concentrated on the flower clusters, or “buds” of the plant.

At week 7-8 of the flowering period, depending on variety and conditions, the plant will enter into the “late” stage of flowering.  During this period, the clusters of white hairs will slowly start to turn from white to eventually some variation of dark brown or red.  The buds will also swell considerably and have extreme trichome production. Typically, the odors released during this time will be considerable and reasonable care should be taken with regards to odor control.

*Tip: Total available height and timing must be taken into consideration when deciding to flower the plant.  Marijuana plants generally double to triple in height from the start of flowering to the end, and take 2-3 months to be ready for harvest. 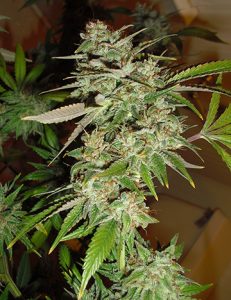 At 1-2 weeks before harvest, or around week 9 with a 10 week variety, feeding often is stopped, and plants are given plain water. this is often called the “flush” period, where the plant is made to use up the balance of nutrients remaining in the medium and hasten it’s finish. During the last 1.5 – 2 weeks the marijuana buds and trichomes will continue to swell further, and about 80-90% of the formerly white hairs will have turned to red or brown.

*Tip: In most circumstances it is normal for larger and medium sized fan leaves to yellow, change color, or fall off during the late flowering and ripening stages of flowering. 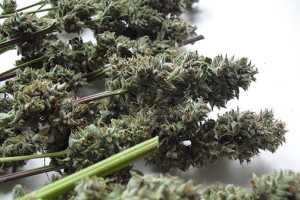 At the end of ripening, it’s time to harvest.  The marijuana buds should be swollen, covered with resinous trichomes, have about 80-90% red or brown hairs, and have a pungent odor. The plants should be pretty dry at the time of harvest, so considerations should be made as to when to give the plant it’s last watering. Plants can be cut from the base and hung upside down on lines, or cut up into smaller pieces and hung to dry.  Plants should dry in total darkness, with indirect air circulation of fresh air along with around 45-55% humidity if possible. Depending on humidity, air circulation and flower size and density, marijuana buds should dry anywhere from 4-8 days.  At the point that the marijuana buds feel crisp to the touch and the stems are just at the “snapping” point, they can be manicured, trimmed off of the main branches and placed into glass jars.

*Tip : When to place the trimmed buds into glass jars can be hard to get right at first.  There still has to be some moisture in the buds, but too much moisture and the delicate smell of the marijuana can be ruined.  Important to remember is that you want around 15% moisture left in the bud and stem before placing it into glass jars.  Even if the leafy parts of the buds feel dry, the moisture locked in the stems will sweat out when placed in the jars. If your marijuana buds smell funny after putting them in glass jars, remove them and let them dry out further before putting them back in.  When you open the jar and the marijuana smells good the you can leave the jar closed and let the curing process commence.