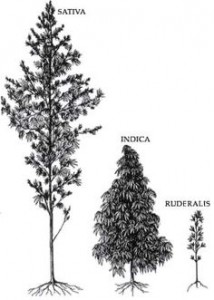 Marijuana, also spelled marihuana, is composed of the leaves and flowers of plants in the genus Cannabis. The term marijuana is sometimes used interchangeably with cannabis; however, the latter refers specifically to the plant genus, which comprises C. sativa and, by some classifications, also includes the species C. indica and C. ruderalis. Marijuana is also known by a variety of other names, including pot, tea, grass, and weed. It is usually dried and crushed and put into pipes or formed into cigarettes (joints) for smoking. It can also be added to foods and beverages. Marijuana varies in potency, depending on the variety and where and how it is grown, prepared for use, and stored. The active ingredient, tetrahydrocannabinol (THC), is present in all parts of both the male and female plants but is most concentrated in the resin (cannabin) in the flowering tops of the female. Hashish, a more powerful form of the drug, is made by collecting and drying this resin and is about eight times as strong as the marijuana typically smoked in the United States.

Mentioned in a Chinese herbal dating from 2700 BCE, marijuana has long been considered valuable as an analgesic, an anesthetic, an antidepressant, an antibiotic, and a sedative. Although it was usually used externally (e.g., as a balm or smoked), in the 19th century CE its tips were sometimes administered internally to treat gonorrhea and angina pectoris. Marijuana’s effects vary, depending upon the strength and amount consumed, the setting in which it is taken, and the experience of the user. Psychological effects tend to predominate, with the user commonly experiencing a mild euphoria. Alterations in vision and judgment result in distortions of time and space.